You are here: Home1 / Saving Art 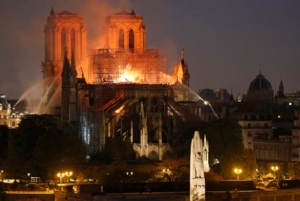 Devastating news last week with the Notre Dame on fire in Paris.  Notre Dame Cathedral is a 850-year-old gothic masterpiece that had been undergoing €6 million restoration work.  The entire wooden interior of the 12th-century landmark was burning and was likely to be destroyed.  Emergency services were not only trying to extinguish the fire to save the building, but were also trying to salvage the artwork and other priceless items stored there. 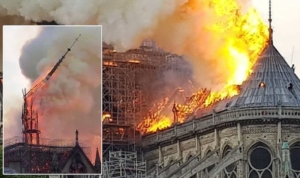 At 6.20pm, Monday 15 April, the fire alarm sounded during mass at Notre Dame Cathedral in Paris. By 7.50pm, timber roof beams, dating from 13th and 19th centuries, were ablaze. Minutes later the cathedral spire collapsed. Sixteen priceless roof statues were saved from the fire as they were removed last week for restoration.  By 9.40pm two of the cathedral’s most precious relics, the Crown of Thorns and the Tunic of St Louis, were among many priceless artefacts rescued from the blaze.  By 11pm, the the fire was less intense and Cathedral saved – church bells were ringing all over Paris.

Before dawn, the Fire Service spokesman stated: “All the works of art that were in the ‘treasures’ area of the cathedral have been saved.” The cathedral housed priceless works of art, architecture, musical instruments, statues, woodwork and religious relics. While the north rose window, Holy Crown of Thorns, Tunic of St Louis, Nicolas Coustou’s sculpture ‘Descent from the Cross’, and the 8,000-pipe great organ were saved, the fate was unknown of the west and south rose windows, Madonna and Child statue and painting of St Thomas Aquinas.

The chaplain of the Paris fire brigade joined a human chain of firefighters to help save priceless religious relics from the burning.

Notre Dame’s principal organist has said Notre Dame’s 8,000-pipe grand organ was not burned in the fire, although its condition – and whether it can still be played – is not yet clear.  All three of Notre Dame’s immense stained glass windows appear to have survived, although experts have yet to inspect them and they may have sustained hidden damage.

A large number of artworks and sculptures were taken from the cathedral and carried across the River Seine to Paris city hall. “We have avoided a complete disaster. But some five to 10 percent of the artwork has probably been destroyed, we have to face up to that,” said Maxime Cumunel, secretary general of France’s Observatory for Religious Heritage.  Apparently other works of art were being transferred from a store room in City Hall to the Louvre yesterday and today.

The French president has said that the cathedral will be rebuilt and announced an international fund raising campaign to pay for reconstruction.  Already private doners have pledged hundreds of millions of Euros to help rebuild Notre Dame.